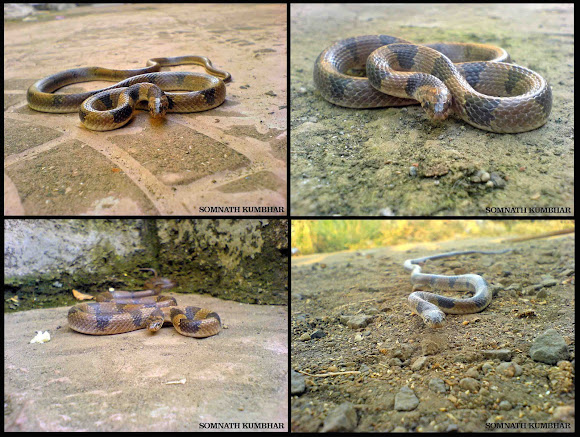 Nasal divided; portion of rostral seen from above as long as its distance from the frontal or a little shorter; suture between the internasals usually nearly as long as that between the prefrontals; frontal as long as its distance from the end of the snout or a little shorter, and a little shorter than the parietals; loreal, if distinct, longer than deep, frequently united with the prefrontal; preocular single; two postoculars; temporals 1+2; upper labials 7, third and fourth entering the eye; 4 lower labials in contact with the anterior chin-shields; posterior chin-shields one half or two thirds the length of the anterior. Scales in 17 rows. Ventrals angulate laterally, 170-202; anal divided; subcaudals 41-59. Pale brown or orange above, with well-defined black cross-bands, which vary in number and in width according to individuals, and may be edged with white; an angular or transverse black band between the eyes, another behind, with the apex on the frontal, and a third on the nape. Lower surface uniform yellowish, rarely spotted with brown or with a brown posterior border to the ventrals.(Smith, 1943:p. 226) Total length 24 inches; tail 3.5 inches. (female 640mm, tail 100mm)

India and Ceylon, northwards to Nepal and the Himalayas, where it has been recorded from an altitude of 4100 feet.