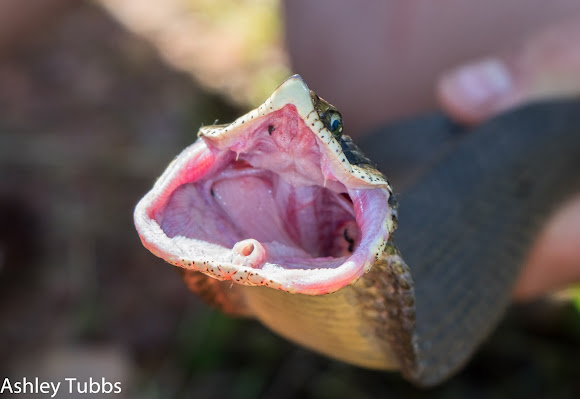 One of my favorite species, this guy was being overly dramatic for no reason! They are known to put on a big show and flatten out their neck, hiss, and roll over and play dead. This guy never rolled over and played dead, but when he would flatten out his neck, he would also open his mouth really wide and hiss. This allowed us to see down his throat (he has a few parasites you can see in his mouth), but the thing I thought was the coolest was getting to see the fangs! Hognose are technically venomous snakes, but their venom is not dangerous to humans. They are rear-fanged (which you can see), and they use these fangs to pop toads. Toads are their main food source, and as a defense mechanism toads fill up with air and become larger to make it harder to be eaten. Not a problem for hognose though!

Found crossing the road in an oak wooded area near Caddo Lake.

Congrats AshleyT, your fabulous capture of this defensive Eastern Hognose has made the top 10 reptile spottings in the '2015 Best Wildlife Photo' mission! Rangers are voting on the top 10 reptile spottings, and the top 3 will be announced on February 8th. The top 3 spottings will be commented on here on the site, but make sure you keep a look out on our Facebook app page for the announcement as well! Congratulations on making the top 10! https://www.facebook.com/projectnoah

these are so great, he looks like he has a big ol' smile :)

They are fairly common over here Chun, always a fun one to find :)

Thanks for sharing.
I never knew such snake existed!

Thanks Juan, maybe one day :)

Congrats for this amazing picture Ashley, you deserve a SOTW

Thank so much Fyn and Namgyal!

Congrats! Love the first shot soo much. One of my favorite of all your photos.

Thanks Hema and Bhagya!

Thanks Mark and Leuba! I think he is still beautiful, Leuba :) Though he may not be the most patterned or colorful, this species is highly variable. Here's a much prettier example I've found: http://www.projectnoah.org/spottings/648...

That is one great spotting Ashley with such interesting shots and information. Thanks for sharing. I know you love your snakes but I am sorry to say that this one is not very attractive. Having said that I've never seen anything flatten itself so much - impressive !!

and 36 other people favorited this spotting