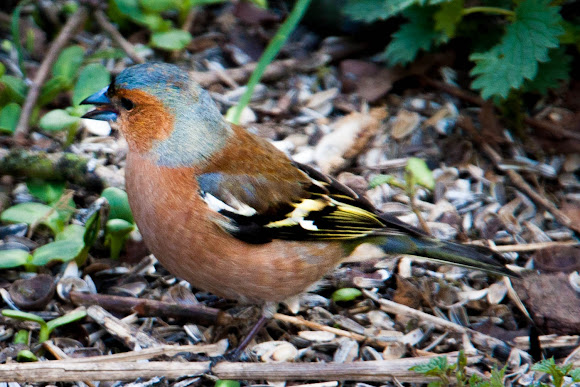 The male is brightly coloured with a blue-grey cap and rust-red underparts. The female is much duller in colouring but both sexes have two contrasting white wings-bars and white sides to the tail. The male bird has a strong voice and sings from exposed perches to attract a mate.

Common Chaffinch is found throughout Europe. It lives from Western Europe to Western Asia, Middle-East, North Africa and the Macaronesian Islands in Atlantic Ocean. In New Zealand and in the South African Republic of Chaffinch has been introduced by man. Birds of the northern parts of the habitat move southwards in winter.

Common Chaffinch feeds mainly on seeds taken on the ground. In the spring buds and in the summer and during the breeding season is the food of 90 percent insects. Territory is occupied in January by oldest males. The youngest birds establish their territory in February or later. Common Chaffinch usually returns to the same territory every year. Male is very aggressive, chasing away intruders or other birds. Female arrives in March. Mates stay together about six weeks before to breed. The male performs courtship displays but the female may be aggressive towards him. However, they feed together on the ground.