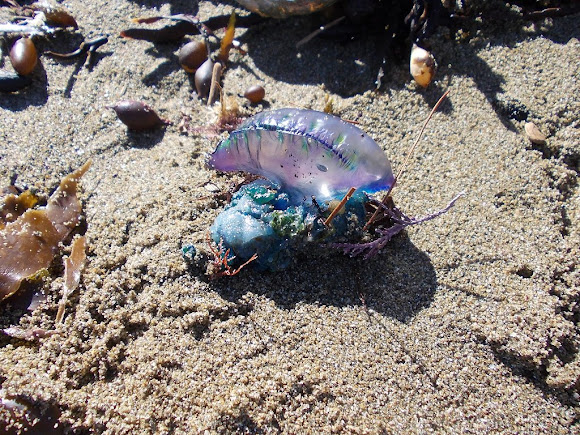 Pacific man-o'-war is not a jellyfish but a siphonophore, which differs from jellyfish in that it is not actually a single creature, but a colonial organism made up of many minute individuals called zooids. Each of these zooids is highly specialized, and, although structurally similar to other solitary animals, they are attached to one another and physiologically integrated to the extent that they are incapable of independent survival. Its venomous tentacles can deliver a powerful sting, even when dead, washed on the beach.cIndividuals of P. utriculus sometimes become stranded on beaches, where their toxic nematocysts can remain potent for weeks or months in moist conditions. P. utriculus is responsible for most of the reported injuries on Australian beaches, where up to 30,000 stings are reported every year, but it is a common find in NZ beaches too. http://www.stuff.co.nz/dominion-post/new...