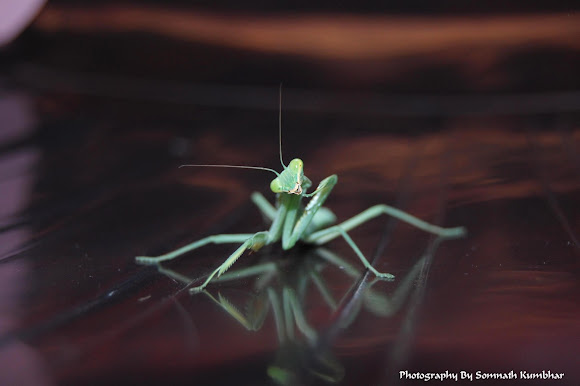 Mantises have two grasping, spiked forelegs ("raptorial legs") in which prey items are caught and held securely. In most insect legs, including the posterior four legs of a mantis, the coxa and trochanter combine as an inconspicuous base of the leg; in the raptorial legs however, the coxa and trochanter combine to form a segment about as long as the femur, which is a spiky part of the grasping apparatus (see illustration). Located at the base of the femur are a set of discoidal spines, usually four in number, but ranging from zero to as many as five depending on the species. These spines are preceded by a number of tooth-like tubercles, which, along with a similar series of tubercles along the tibia and the apical claw near its tip, give the foreleg of the mantis its grasp on its prey. The foreleg ends in a delicate tarsus made of between four and five segments and ending in a two-toed claw with no arolium and used as a walking appendage. The mantis thorax consist of a prothorax, a mesothorax, and a metathorax. In virtually all species the prothorax, to which are attached the head and forelegs, is much longer than the other two thoraces (the sole exceptions are the seven members of the Mantoididae family). The prothorax is also flexibly articulated, allowing for a wide range of movement of the front limbs while the remainder of the body remains more or less immobile. The articulation of the head is also remarkably flexible, permitting nearly 300 degrees of movement in some species, allowing for a great range of vision (their compound eyes may contain up to 10,000 ommatidia and have a large binocular field of vision). The dark spot on each eye is a pseudopupil. As their hunting relies heavily on vision, they are primarily diurnal, but many species will fly at night, especially males in search of less-mobile females whom they can detect through pheromones. Flying at night allows these males to avoid many diurnal bird predators, and many mantises also have an auditory thoracic organ that assists them as they attempt to avoid capture by bats by detecting the presence of the bat's echolocation sounds and responding evasively. Mantises have a wide range of wing morphologies and can be loosely categorized as being macropterous (long-winged), brachypterous (short-winged), micropterous (vestigial-winged), or as apterous (wingless). If not wingless, a mantis will have two sets of wings: the outer wings, called the foreseeing or tegmina, are usually narrow, opaque, and leathery and function as camouflage and as a shield for the inner wings, or hindwings—it is this much more delicate, broad, and transparent set that is actually used for flight, though in many of the brachypterous species these wings are only capable of producing minimal and very temporary lift and in the micropterous species they have no flight-related function at all. Also, in many macropterous species, the female will have much shorter wings than the male and will only rarely take flight. The abdomen of all mantises consist of ten tergites with a corresponding set of nine sternites visible in males and seven visible in females. The slim abdomen of most males allows them to take flight more easily while the thicker abdomen of the females houses the reproductive machinery for generating the ootheca. The abdomen of both sexes ends in a pair of cerci.