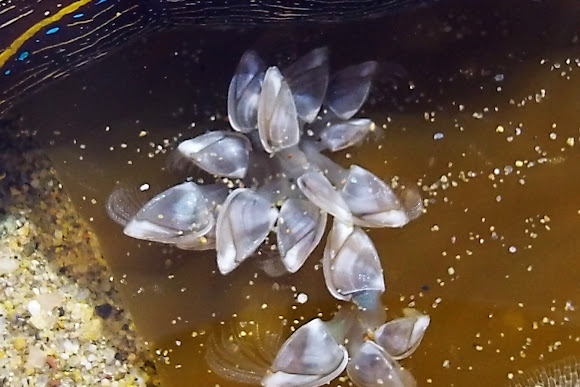 From Wikipedia: "Dosima fascicularis, the buoy barnacle, is "the most specialised pleustonic goose barnacle" species. It hangs downwards from the water surface, held up by a float of its own construction, and is carried along by ocean currents. As an adult, D. fascicularis lives attached to a float made either of natural flotsam or of a cement it secretes itself, which has a texture like that of expanded polystyrene foam. It is the only barnacle to produce its own gas-filled float. The cyprid larvae are planktonic, and must attach to a float for metamorphosis into the adult form, but the adults are eventually capable of using their own float, sometimes forming aggregations of many individuals attached to a single float. Among the floats used by adult buoy barnacles are pellets of tar, seaweeds, plastic debris, driftwood, feathers, cranberries, cuttlefish bone, the "by-the-wind-sailor" Velella velella, seagrass leaves, Styrofoam, seeds, and even apples; they have even been known to colonise the backs of turtles and the sea snake Pelamis platurus. It is a fugitive species, which can be out-competed by other barnacle species, and relies on being able to colonise surfaces and reproduce quickly; after settling on a float, D. fascicularis can reproduce within 45 days. D. fascicularis appears to be increasing in abundance as a result of anthropogenic marine debris accumulating in the sea; this source of floats was of "minor importance" in 1974."