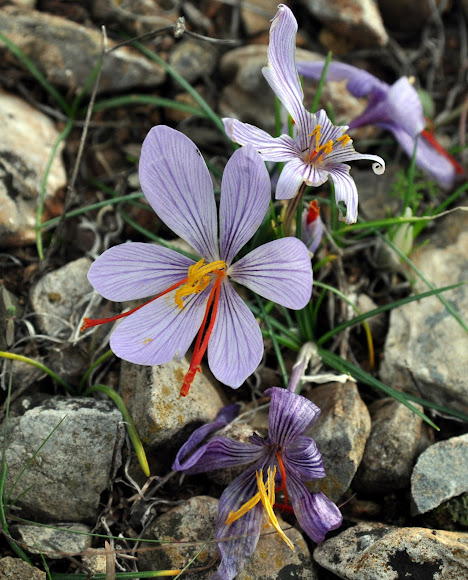 Crocus cartwrightianus is native and endemic in southern Greece with the center of Attica and spreads on the axis Attiki (and Salamina, Aegina), Cyclades (Santorini, Naxos, Mykonos, Tinos, Syros, Kea) and Chania. C. cartwrightianus is the wild ancestor of Crocus sativus that Its dried dots give the saffron, a very expensive product (to produce a kilo of saffron need 150,000 crocus flowers). The bibliography states that John Cartwright, a British consul in Istanbul, sent a plant from Tinos to herbalist Herbert Spencer, who published his scientific description and to honor the consul gave the plant his name. In later years Greek traders from Vienna brought bulbs to Kozani area (West Macedonia /Northern Greece) for cultivation. Crocus of Kozani, has bigger "spots" but is infertile.

The last picture is ... the same as the first, with a festive wrap for the upcoming holiday.

You are welcome Brian!
On page 353 of the pdf you can find out how the word for the plant 'Crocus' was written in Linear B!

That is an amazing picture of an ancient wall fresco that truly speaks volumes all on it's own. Thank you Tania very much for sharing this !!

Thanks Neil and Michael.

and read more about "Crocus Motif in the Aegean Bronze Age" here: https://www.ascsa.edu.gr/.../hesperia/he...

Congratulations, Tania. This is a lovely spotting.

Thank you all so much!
It was great, for me too, to learn the stories about this important plant.

Bautiful series Tania,congrats on the SOTD and thanks for sharing

Congratulations Tania: your Crocus cartwrightianus is our Spotting of the Day! Glad to learn where saffron is coming from!

"As the Northern Hemisphere is about to enter the winter season, our Spotting of the Day brings us a last touch of late autumn warmth and spice from Greece: Crocus cartwrightianus is our Spotting of the Day! Named after John Cartwright, a 19th century British Consul to Constantinople, this crocus species is the most likely candidate as the wild progenitor of the domesticated Crocus sativus – the saffron crocus. Saffron is made from the long stigmas and styles of Crocus sativus flowers, and is one the world's most costly spices by weight.
Spotted in Attica, Greece, by Tania Zach. For more images and information: https://buff.ly/2GhDIIm
On Project Noah Tania maintains a mission dedicated to the biodiversity of Attica. Despite thousands of years of habitation and continuous human activity, Attica remains diverse in life forms, habitats, landscapes, with even new species to discover. Check it out: https://buff.ly/2UKOCtx "