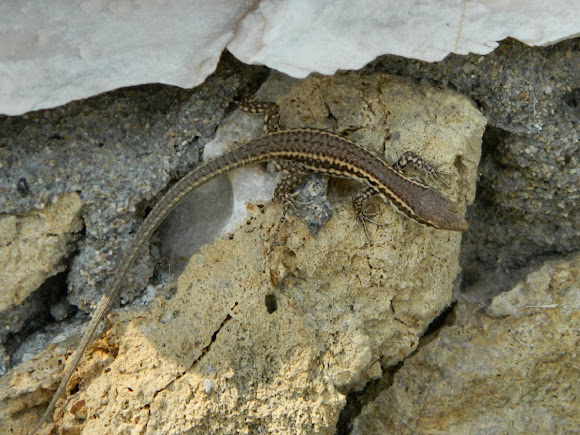 The Skyros wall lizard (Podarcis gaigeae) is a species of lizards in the family Lacertidae. The species is endemic to the islands of Skyros and Piperi, Greece. The Skyros wall lizard occurs only on Skyros and on Piperi Island in the Sporades archipelago in the northern Aegean Sea. It is the only small lizard occurring on these islands. It also exhibits island gigantism on small islets surrounding Skyros. The colouring is rather variable, usually being green, olive-green, or brownish, with a dark vertebral band and dorso-lateral stripes. The mottled flanks often have a single blue spot above the shoulder. The underparts are white, often with dark spots on the throat, the lizards on each island having characteristic markings. The species is protected by the Greek and European law and is considered vulnerable. Spotted in Skyros island, Greece.