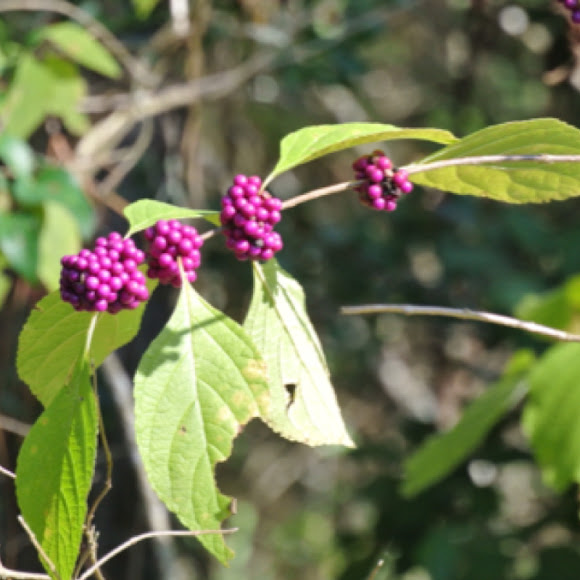 American beautyberry, also widely known as French mulberry, even though it is neither French nor a mulberry, produces luminescent purple clusters of fruit in fall. It is an open, sprawling native deciduous shrub growing 6 to 8 feet tall and wide with a natural range from Virginia to East Texas. This is the only species of the 130 that have been described native to the continental United States. It is a member of the verbena family.

High shade along edge of woods.

Recent studies indicate beauty berry leaves contain several very strong mosquito repellent molecules. Toxicity of these molecules still needs to be determined. Native Indians had many uses for the Beautyberry, among them: A decoction of the root bark as a diuretic; the leaves for dropsy; a tea from the roots for dysentery and stomach aches; A tea made from the roots and berries for colic; and, the leaves and roots in sweat baths for the treatment of malaria, rheumatism and fevers. A study published 6 Feb 2007 Journal of Natural Products suggests the C. Americana has anti-cancer potential. Beautyberry reportedly makes a good jelly. This recipe was online. 1 ½ qts. of Beautyberries, washed and clean of green stems and leaves. Cover with 2 qts. water. Boil 20 minutes and strain to make infusion. Use 3 cups of the infusion, bring to boil, add 1 envelope Sure-Jell and 4 ½ cups sugar. Bring to second boil and boil 2 minutes. Remove from heat and let stand until foam forms. Skim off foam, pour into sterilized jars, cap.