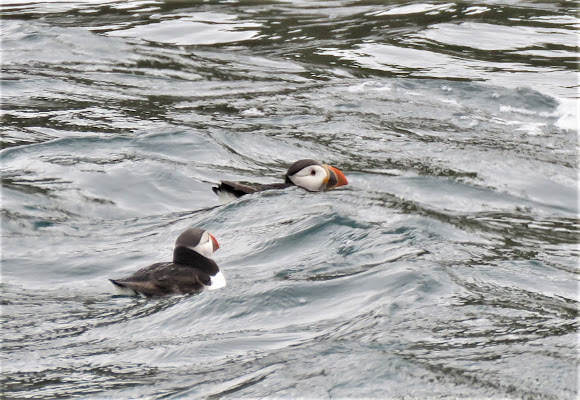 Atlantic Puffin is a spectacular seabird, size of an average pigeon, from the Auk family, Alcidae; and they were one of my dream spotting for this trip... This is stocky and short-winged bird with disproportionately large head; black above and white below, with orange-red legs. During the breeding season they sport large and colourful bill, whose outer colourful shell is shed in winter, thus diminishing in size and losing those bright colours. In French, this Puffin is often referred to as "Sea Parrot" or "Sea Clown", because of its joyful colours.

Observed close to shores of rocky islands in protected natural reserve "the 7 Islands Archipelago", a set of rocky islands off northern shore of Brittany, France. Here, in this reserve, they share the spots with razorbills and puffins and we observed these three species very close to each other (puffins present also in pics 1 and 3). These three species nest close to water, while the rest of their island (Rouzic) is occupied by a huge colony of Northern Gannets.

This set of rocky islets has been a protected natural site since 1912, thanks to an action targeting this bird. Atlantic Puffin was, at that time, regularly hunted, for food and for fun, and its population on Rouzic island decimated. In 1911, concerned ornithologists raised the alarm. The following year, in collaboration with local authorities they managed to push forward a law protecting this archipelago and forbidding this hunt. By the way, the same year, based on this action, the French "Ligue pour la Protection des Oiseaux" (LPO) or Bird Protection League was born - and the Atlantic Puffin remains its symbol. The archipelago was further classified as a Nature Reserve in 1976. Today, and so far, the Reserve is an undisputed kingdom of seabirds (27 breeding species), and the access to these islands (actually, there are only five islands and two groups of rocks...) is very limited. One can visit the islands only by the boat, and enjoy the spectacle only from it. Only one island, les Moines, can be visited on foot - not many seabirds chose to nest there. All others others islands are visited only rarely, when all couples and chicks leave in order to count and clean the area; and only by staff in charge of managing the place.