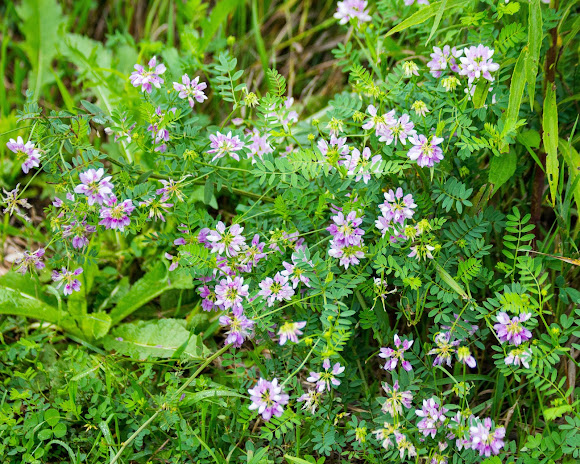 Securigera varia (synonym Coronilla varia), commonly known as crownvetch or purple crown vetch, is a low-growing legume vine. It is native to Africa, Asia and Europe and is commonly used throughout the United States and Canada for erosion control, roadside planting and soil rehabilitation. It has become an invasive species in many states of the US. Crownvetch grows 1 to 2 feet tall and bears small clusters of 1/2-inch pink and white flowers from early summer to late fall. The variety Penngift produces mounds of pink flowers. Crownvetch is a tough, aggressive spreading plant that will crowd out its neighbors in a show garden but is well suited to a sunny bank, where it will grow for decades with little to no fertilizing, mowing, or weeding since the thick foliage prevents weeds from growing amid it. Its deep, tenacious, complex root system and thick, fern-like leaves provide excellent erosion control where it is used as a ground cover. However, this legume has a very long germination period of about 6 months and does not create full coverage until two or three years later.