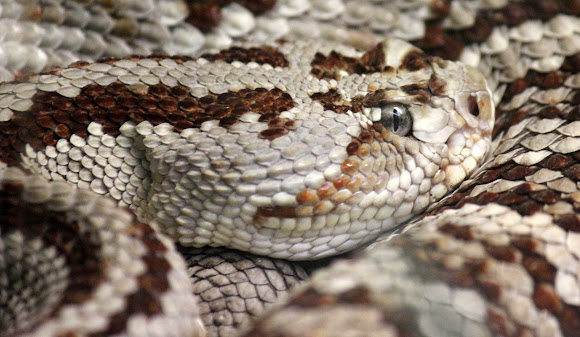 Photo take in a mayan community in the jungle, as sun i arrive from Ensenada i been invite to a mayan community to help in the build of a new center for honey process, one of the kids star to scream Tzabcan Tzabcan, i just can believe it there hide under a bush,is my first time i have seen one in 25 years looking for one, i was very scare when i take this photos about 1 m long very calm.The body has a rough appearance because the dorsal scale keels are accentuated into protuberances or tuberculations. This is most apparent on the scale rows on either side of the body with a decreasing intensity in the lower rows. The vertebral scales are about as prominently keeled as the fourth row down on the flanks. Wikipedia.

Is found in Mexico and Central America. The specific epithet is Latin for "flat-nosed", likely because its head is blunt compared with lanceheads.

To the Mayans and their living descendants, the Yucatan subspecies was greatly revered. The word tzabcan means rattlesnake in Mayan. It is unknown what the rattlesnake actually symbolizes, but many temples have had rattlesnake shapes carved. Shamans also dry and roast snakes, grinding them into a powder used as medicine.

Wow this is awesome, Gerardo!

Thanks Maria and Scott :)

Beautiful series, glad you found one!

Thanks Atul i was very happy to see one in the wild :):)

Awesome spotting Pal ...... and nice little piece of info in the notes section :)