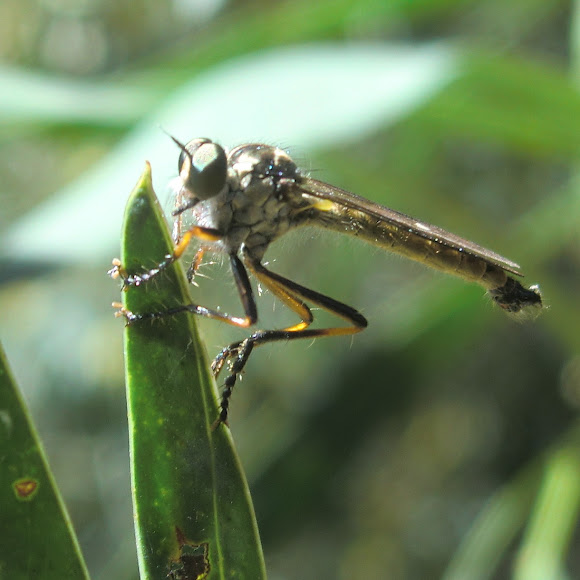 Family: Asilidae. Over 600 species in Australia. Also known as 'Bee killer' and 'Assassin fly'. "This robber fly has the antenna in plumose form, i.e., like a feather. Its legs are black femur with yellow tibia and black tarsus. Wings are dark brown in colour." - http://www.brisbaneinsects.com/brisbane_... | "Robber Flies are medium to large hunting flies with long strong legs used to catch prey on flight. They have large eyes, and distinct "neck" between the head and abdomen. The abdomen is long and thin. Most species have a beard of stiff bristles (called setae) around the proboscis. Most Robber Flies are brown or reddish-brown in colour. The eyes are large and in some species are reflective. Some species can give people a painful bite." Ozanimals

Thanks asergio... I guess I should remove the question mark :) Just need species.

It certainly is a robber fly, Argy. The massive thorax, long abdomen and the powerful rostrum give it away.