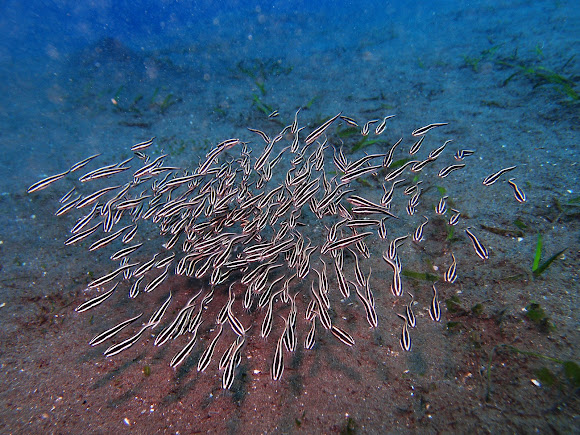 Is a species of eeltail catfishes belonging to the family Plotosidae. Plotosus lineatus can reac a maximum length of 32 cm (13 in) in males. The body is brown with cream-colored or white longitudinal bands. The most striking feature of this species is in the fins, in fact the second dorsal, caudal and anal are fused together as in eels. In the rest of the body is quite similar to a freshwater catfish: the mouth is surrounded by four pairs of barbels, four on the upper jaw and four on the lower jaw. The first dorsal and each of the pectoral fins have a highly venomous spine. They may even be fatal. Juveniles of Plotosus lineatus form dense ball-shaped schools of about 100 fish, while adults are solitary or occur in smaller groups of around 20 and are known to hide under ledges during the day. Adult P. lineatus search and stir the sand incessantly for crustaceans, mollusks, worms, and sometimes fish. Striped eel catfish is an oviparous fish; this species has demersal eggs and planktonic larvae. This species has evolved long ampullary canals in its electrosensory organs (originally termed "ampullae of Lorenzini").

P. lineatus is found in coral reefs; it is also found in estuaries, tide pools and open coasts.Present in the eastern Mediterranean, in the Indian Ocean, in the western Pacific Ocean and sometimes entering freshwaters in East Africa and Madagascar.