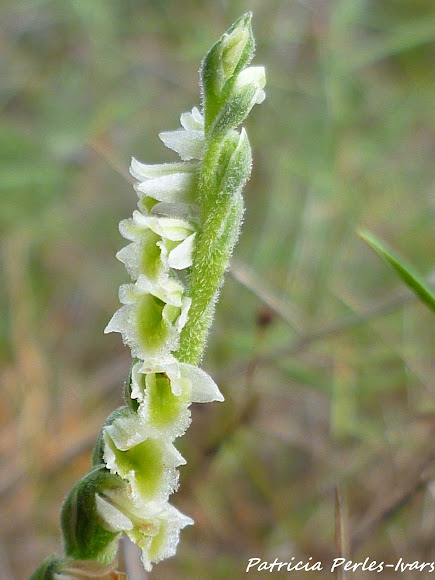 Spiranthes spiralis, commonly known as Autumn Lady's-tresses, is a palearctic orchid which from Europe. t is characterised by a spiral inflorescence produced after the leaves have died down. The inflorescence can be very small (as little as 50mm high) especially in short grazed grassland. S. spiralis is a short tuberous perennial which reaches heights between 5 and 30 centimeters. The stem is stickily-hairy.The plant has two tubers as storage organs, rarely, one or three. From Autumn two new tubers are formed and the old tubers lowly die off. The shiny oval-elliptical foliage leaves form a basal rosette close to the ground and to one side of the flower-spike. There are from three to seven and they have a length of 1.5 to 3.5 cm and a width of 1 to 1.5 cm. The leaves are often withered by flowering time. The stem leaves are scale-like and overlapping;the bracts are shorter than the flowers. The flowers are white, 6-7mm long. There are up to 20 borne in a slender spiral 3 to 12 cm long .The outer 2 sepals are spreading, the upper sepal and the petals fuse to form a tube with the lip. The lip has up-curved edges and is yellowish-green. The edge of the lip is notched and appears viewed up close as frayed.