Sea urchins off the coast of Sardinia, Italy 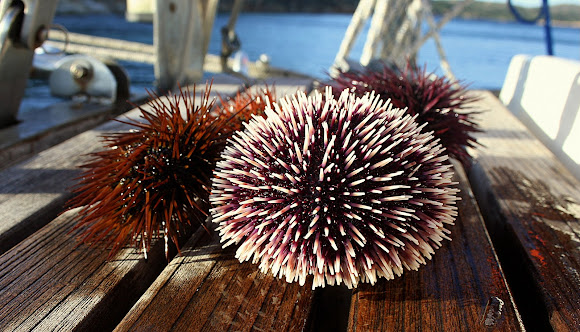 Sea urchins or urchins are small, spiny, globular animals which, with their close kin, such as sand dollars, constitute the class Echinoidea of the echinoderm phylum. There are c. 950 species of echinoids inhabiting all oceans from the intertidal to 5000 meters deep.[1] Their shell, or "test", is round and spiny, typically from 3 to 10 cm (1.2 to 3.9 in) across. Common colors include black and dull shades of green, olive, brown, purple, and red. They move slowly, feeding mostly on algae. Sea otters, wolf eels, triggerfish, and other predators feed on them. Their "roe" (actually the gonads) is a delicacy in many cuisines. The name "urchin" is an old name for the round spiny hedgehogs that sea urchins resemble.

Sardina, Corsica, along the Coast of the Mediterranean Sea.

Aren't they supposed to be in the "other" category? I mean, they're non-vertabrets after all...