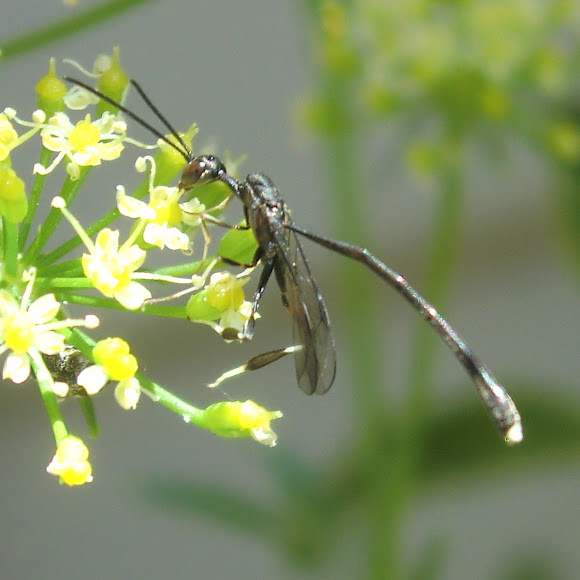 A tiny, delicate and dramatic looking black wasp was visiting some parsley flowers. It was about 18mm long including antennae and very narrow long abdomen so it was quite hard to see. When flying it's rear legs dangle with white tarsi and a bright white tip on it's abdomen so they were most obvious visually. It also has an incredibly long neck and flattened broad rear tibiae. As it buried it's face into a flower the abdomen would wave up and down continuously.

On parsley flowers in suburban garden.

" The family Gasteruptiidae is one of the more distinctive among the Apocritan wasps, with surprisingly little variation in appearance for a group that contains around 500 species in 9 genera worldwide. The propleura form an elongated "neck", the petiole attaches very high on the propodeum, and the hind tibiae are swollen and club-like. The females commonly have a long ovipositor, and lay eggs in the nests of solitary bees and wasps, where their larvae prey upon the host larvae and provisions. The absence of "teeth" on the crown of the head and the somewhat thickened antennae readily separate these wasps from those in the unrelated family Stephanidae, which also contains very slender wasps with long necks. " - [Wikipedia]
CSIRO doesn't have a species name for this. http://anic.ento.csiro.au/insectfamilies...
Distribution seems to be Australia wide.. http://spatial.ala.org.au/?q=lsid:%22urn...

I think I found the female for you: http://www.projectnoah.org/spottings/170...

Another bee and wasp predator. I hope that you get to see a female and post it. This one looks like it folds up nicely for the night. ")

What a neck! I've seen one of these before.

delicate, weird and fascinating ! including the name "gasteruption" - sounds like an exploding abdomen...

The females of this looks really bizarre with an ovipositor the same length as the rest of her !!

Thanks NTG. I've researched and added some more info. They are really interesting with some weird behaviours.

They really are strange looking Agnes. I'm researching more now and will update this one later.

Wow, first time to see a wasp like this. It looks like it has a dragonfly's tail!