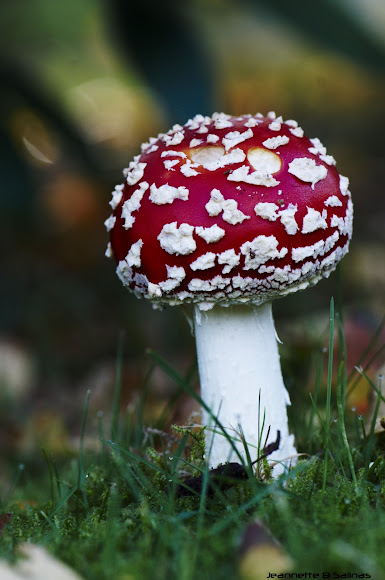 Amanita muscaria, commonly known as the fly agaric or fly amanita , is a poisonous and psychoactive basidiomycete fungus, one of many in the genus Amanita. Native throughout the temperate and boreal regions of the Northern Hemisphere, Amanita muscaria has been unintentionally introduced to many countries in the southern hemisphere, generally as a symbiont with pine plantations, and is now a true cosmopolitan species. It associates with various deciduous and coniferous trees. The quintessential toadstool, it is a large white-gilled, white-spotted, usually deep red mushroom, one of the most recognizable and widely encountered in popular culture. Although it is generally considered poisonous, deaths from its consumption are extremely rare, and it is eaten as a food in parts of Europe, Asia, and North America after parboiling. Amanita muscaria is noted for its hallucinogenic properties, with its main psychoactive constituent being the compound muscimol. It was used as an intoxicant and entheogen by the peoples of Siberia and has a religious significance in these cultures. There has been much speculation on traditional use of this mushroom as an intoxicant in places other than Siberia; however, such traditions are far less well documented. The American banker and amateur ethnomycologist R. Gordon Wasson proposed that the fly agaric was in fact the soma of the ancient Rig Veda texts of India; since its introduction in 1968 this theory has gained both followers and detractors in anthropological literature.

Amanita muscaria is a cosmopolitan mushroom, native to conifer and deciduous woodlands throughout the temperate and boreal regions of the Northern Hemisphere.

Thank you very much MacChristiansen :)

Nice ending of a nice story :)

At that time, it really would have been a problem, meaning dad would kill the baby bears (which is a normal habit in nature, if something goes wrong). But they were separated from the father. No all 4 were together again.

Very cute baby bears :) Not nice to have a dad like that, maybe it had been eaten to many amanitas ;-)

Some theories about the vikings :)

All what you need for dreaming is some Amanita and Wodka!
Did you ever taste Amanita, tobacco and cannabis? (Me not, at least the first one and the last one a loooong time ago, during other 10 minutes of kidding which was nicely prolonged...)
Unbelievable what people are doing with these fungi...
http://schamanenstube.com/blog/fliegenpi...
http://www.eve-rave.ch/Forum/viewtopic.p...
Definitely not my world...
Nice dreams what ever you take, best: Have some nice pictures on Project Noah, that definitely makes nice dreams ;-)...

I love this pretty mushroom! I agree, it looks quite delicious! :-)

Thank you Ruby :)
Yes, it looks delicious but is quite poisonous...

Thank you Oneng and Marta :)