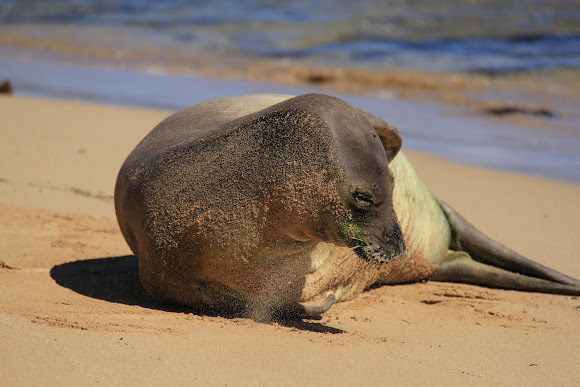 Hawaiian monk seals are one of the most endangered animal species in the world. Only about 1,100 seals are left and their overall population is massively in decline!

The Monk Seals are known to have a lot of algae on there body from spending months out at sea. This Seal was spotted during a walk on the South of Kauai Island, Hawaii, resting on the beach. Approximately 20 monk seals live around Kaua‘i...

I was in Hawaii for a total of 2 weeks and I travelled to four different Islands. When I heard that there where seals native to the island I soent the whole 2 weeks exploring secluded bays and beaches to try and see one. Lucky enough on my last day in Hawaii I went on a 4 hour walk with my camera along the south coast of Kauai. Towards the end of the walk I came across this guy just resting on the sand. I took so many pictures and watched this guy chilling out for quite some time. I have attached a website about the Hawaiian Monk Seals for some more facts. http://www.fpir.noaa.gov/PRD/prd_hms_ind...

Congratulations on this wonderful SotD !

Thanks so much! Great to wake up to a SOTD in the morning! :)

I'm thinking NAP time just looking at them. Congrats on the SOTD!

Sean, congratulations on earning Spotting of the Day! We're using this incredible photo series to remind our community that Hawaiian Invasive Species Awareness Week kicks-off tomorrow. We're teaming up with the Hawaiian Invasive Species Council (HISC) to document native and non-native species across the islands, connect with scientists & experts, and to be part of a larger movement to catalog species across Hawaii. Congrats on this wonderful spotting and let's make sure we continue to do all we can to protect the incredibly unique and diverse species that call Hawaii home.

Here's where we featured your spotting:

The same as this beach Karen, however there where no ropes just a sign post saying not to get too close.

Nice spot! I was lucky enough to see one of these in Kauai. The beach it was on had been cleared of tourists & the seal had been cordoned off with ropes to prevent anyone from approaching too closely. It's good to see that they are taking its conservation so seriously.