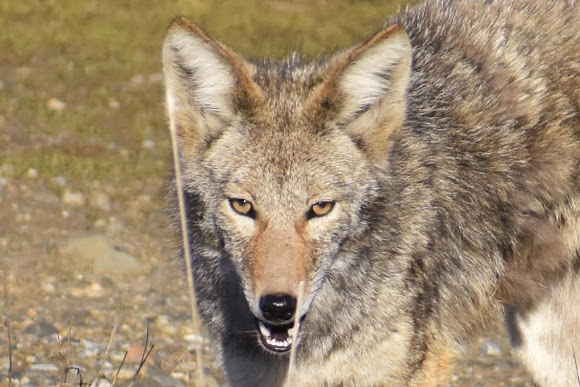 This was the first time I've seen a coyote at the Nisqually Wildlife Refuge. He or she must have been hungry to be foraging in the daylight. Its colors blended in beautifully to the grass meadows and mud flats which it was in. In the notes I listed its feeding habits.

Spotted at the edge of the mud flats at the Nisqually Wildlife Refuge.

Coyotes are opportunists, both as hunters and as scavengers. They eat any small animal they can capture, including mice, rats, gophers, mountain beavers, rabbits, and squirrels, also snakes, lizards, frogs, fish, birds, and carrion (animal carcasses). Grass, fruits, and berries are eaten during summer and fall. Grasshoppers and other insects are important to juvenile coyotes learning the stalk-and pounce method of hunting. Pairs of coyotes or family groups using the relay method pursue small deer and antelope. These mammals are important food in winter; fawns may be eaten in spring. Coyotes eat wild species, but they are known to eat pet food, garbage, garden crops, livestock, poultry, and pets (mostly cats). Coyotes occasionally kill domestic dogs (and foxes) that they consider territorial intruders. Coyotes are also very protective of their young and will attack dogs that get too close to their den and pups. Note: The list of killers of domestic cats and dogs includes other dogs and cats, vehicles, bears, cougars, bobcats, foxes, disease, and furious neighbors! Most hunting activity takes place at night. Undisturbed and hungry coyotes will hunt during daylight hours, and may be seen following farm machinery, catching voles and other small prey.

Coyotes are great. I had a huge tame one for several years that was captive born. During the winter with his heavy coat, he almost looked like a wolf. Extremely smart. He could open any manual lock. It took a secure locking mechanism to keep in it. Thanks for sharing Brian.