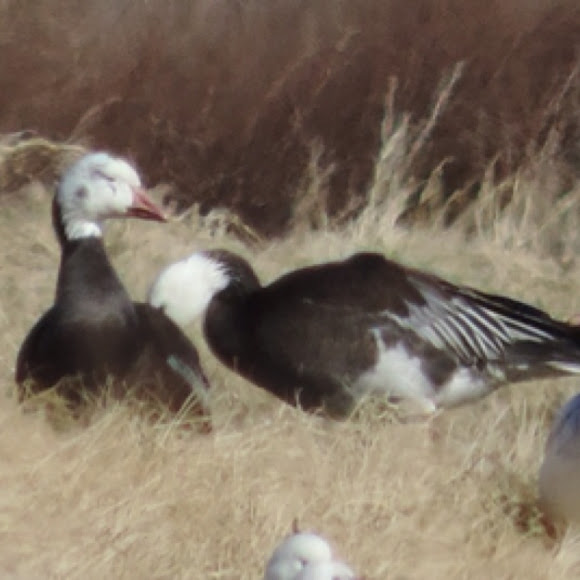 A medium-sized goose with a hefty bill and long, thick neck. Juveniles are slightly smaller than adults in the fall, and this can be noticeable in flocks during fall and early winter. The Snow Goose is a white-bodied goose with black wingtips that are barely visible on the ground but noticeable in flight. The pink bill has a dark line along it, often called a "grinning patch" or "black lips." You may also see dark morph Snow Geese, or "Blue Geese," with a white face, dark brown body, and white under the tail.

Hagerman National Wildlife Refuge (HNWR), a haven for migratory birds and other wildlife, lies in northwestern Grayson County, Texas. It was established in 1946 as an overlay of a portion of the Big Mineral arm of Lake Texoma in north-central Texas. Consisting of about 12,000 acres, the refuge provides a variety of habitats for birds and wildlife. It is made up of water, marsh, and upland habitat. The main focus at HNWR is providing a winter home for thousands of waterfowl. Canada, snow, white-fronted, and Ross' geese along with pintail, mallard, gadwall and other ducks use refuge impoundments and fields as stop-over and wintering grounds. At times, as many as 10,000 geese can be seen in one field. Ducks such as mallards, northern shovelers, green-winged teal, and northern pintail are commonly seen on refuge waters during fall and winter months.

At one time, blue snow geese (Chen caerulescens) were classified as an individual species. However, blue snow geese are now considered to be a dark color morph of snow geese - or a dark phase. The dark color of the blue morph Snow Goose is controlled by a single gene, with dark being partially dominant over white. If a pure dark goose mates with a white goose, the offspring will all be dark (possibly with white bellies). If two white geese mate, they have only white offspring. If two dark geese mate, they will have mostly dark offspring, but might have a few white ones too.