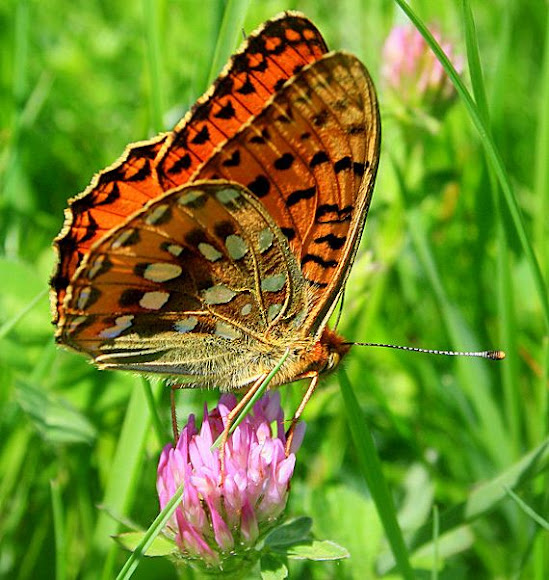 The Silver-washed Fritillary is one of Europe's largest and most magnificent butterflies. The male, illustrated above is easily distinguished from the female by the 4 prominent horizontal dark streaks on it's forewings. These contain androconial scales, from which pheromones are released during the courtship flight.

The Silver-washed Fritillary prefers slightly shadier conditions than most other woodland Fritillaries and is better able to survive in high canopy forests and woods that have become neglected and overgrown. The highest populations occur in mature oak and beech plantations where a program of regular thinning encourages a profusion of dog violets to germinate beneath the trees. The best sites are also typified by having glades and grassy tracks where thistles, brambles and other nectar sources are abundant.

Periodically the pair fly down to settle on bracken or hazel, or to nectar at bramble, but return to the tree tops if disturbed. Copulation lasts about 2 hours and takes place in late morning or early afternoon.

Hi Ruby Rausch! Juts a kind reminder to change the ID for this butterfly, which is not a Silver-washed Fritillary. Bayucca has provided you with the right ID, Dark Green Fritillary, Argynnis aglaja.

Hi Ruby Rausch! Nice series! European fritillaries make for a tricky group. This is not Argynnis paphia, which has very different underwing markings: have a look here:
http://www.pieris.ch/seiten/main.php?pag...
http://www.leps.it/
My advice would be for you to have this butterfly as Unidentified, and tick the help for ID box. This will get more users who regularly check the Unidentified list to look at it. The two sites I mentioned are good places to look. Here's another one (and there are many more):
http://www.eurobutterflies.com
I'm looking further but someone else might find it before I do!