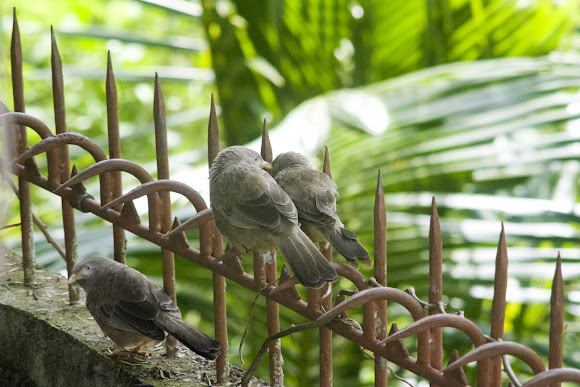 These birds have grey brown upper parts, grey throat and breast with some mottling, and a pale buff belly. The head and nape are grey. The Sri Lankan form T. a. taprobanus is drab pale grey. Nominate race of southern India has whitish crown and nape with a darker mantle. The rump is paler and the tail has a broad dark tip. Birds in the extreme south of India are very similar to the Sri Lankan subspecies with the colour of the crown and back being more grey. The eye is bluish white. The Indian form is more heavily streaked on the throat and breast.[3] The Sri Lankan subspecies resembles the Jungle Babbler, Turdoides striatus, although that species does not occur on the island

This species is patchily distributed in southern India and Sri Lanka. The nominate subspecies is found in Andhra Pradesh, south of the Godavari river and Karnataka south of Belgaum into Tamil Nadu. It prefers lower altitudes and drier habitats than the Jungle Babbler but sometimes is found alongside it. The Sri Lankan subspecies is found in the lowlands and hills up to about 1500m avoiding heavy forest.

The Yellow-billed Babbler lives in flocks of seven to ten or more. It is a noisy bird, and the presence of a flock may generally be known at some distance by the continual chattering, squeaking and chirping produced by its members. One member often perches high and acts as a sentinel while the remaining members of the flock forage on or close to the ground. They feeds mainly on insects, but also eat fruit, nectar and human food scrap.

These are really noisy birds.