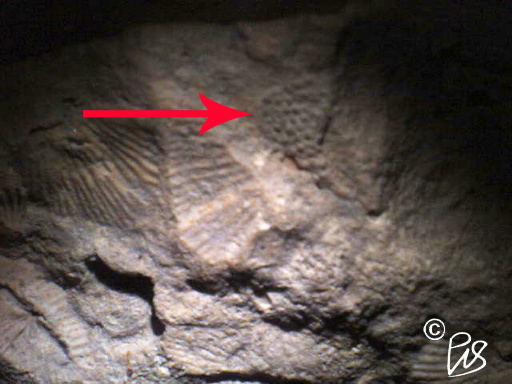 There are many fossil examples on this rock. The one featured here is most likely a part of a crinoid. Crinoids are marine animals that make up the class Crinoidea of the echinoderms (phylum Echinodermata). Crinoidea comes from the Greek word krinon, "a lily", and eidos, "form". They live both in shallow water and in depths as great as 6,000 meters.[citation needed] Sea lilies refer to the crinoids which, in their adult form, are attached to the sea bottom by a stalk. Feather stars or comatulids refer to the unstalked forms. Crinoids are characterized by a mouth on the top surface that is surrounded by feeding arms. They have a U-shaped gut, and their anus is located next to the mouth. Although the basic echinoderm pattern of fivefold symmetry can be recognized, most crinoids have many more than five arms. Crinoids usually have a stem used to attach themselves to a substrate, but many live attached only as juveniles and become free-swimming as adults. There are only about 600 extant crinoid species,[6] but they were much more abundant and diverse in the past. Some thick limestone beds dating to the mid- to late-Paleozoic are almost entirely made up of disarticulated crinoid fragments. There is also an example of coral (see spotting http://www.projectnoah.org/spottings/159...). This rock contained several other fossil examples of the brachipod variety as well (see spotting http://www.projectnoah.org/spottings/162...). The rock measures ~40 mm (1.6 in) long and ~12.5 mm (.50 in) wide. This fossil measures a mere ~3.6 mm (.14 in) wide and ~2.3 mm (.90 in) high. These fossils date to the Devonian Period (416-359.2 million years ago).

The close up pictures were taken with a Digital Blue QX5 USB Microscope at 10x power.

Added measurements to the description.

Funny because I had looked them up several times before and missed that glaring fact. Very interesting creature indeed.

An easy mistake to make. I admit, I had to look up crinoids to be sure.

Good point, Keith. I should have caught that with the coral for sure but did not realize it with the crinoid. I will correct it. Thanks!

Both corals and crinoids are animals.