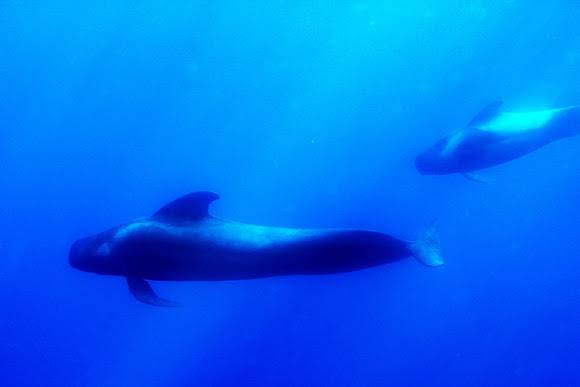 Short finned pilot whales are medium sized cetaceans that belong to the dolphin family. They can reach lengths up to six meters, have dark grey to black bodies and are quite stocky in their appearance. Compared to other large species in the dolphin family (like orcas) the dorsal fin is located more to the front of the body. Their pectoral fins are short with sharp 'pointy' edges and their head is bulbous.

Open ocean and deep coastal waters. The ones in this spotting is part of a large group that inhabit the waters between the southern part of Tenerife and La Gomera.

When we spotted the group they were slow swimming and seemed quite docile. That is because they were decompressing in the surface waters after feeding on squid at greater depths. The underwater shots are taken from a glass bottom catamaran.

Thank you Karen, they were really beautiful.. Needless to say I got pretty excited when I got to see them underwater!