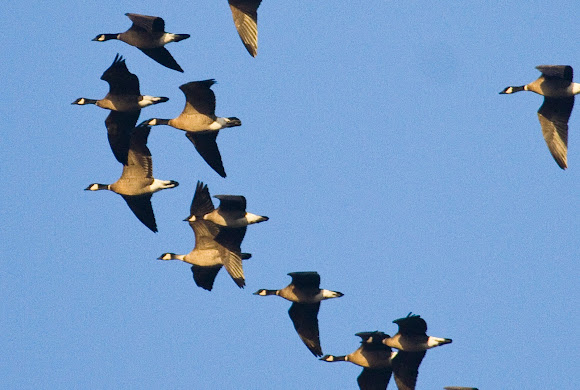 The Aleutian Cackling Goose (Branta hutchinsii leucopareia), formerly known as the Aleutian Canada Goose (Branta canadensis leucopareia), is small subspecies of Cackling Goose averaging 1700 to 2100 grams. It was one of 122 species of animals, birds and fish first documented for science by the Lewis and Clark Expedition. The Aleutian Cackling Goose has the typical black head and neck, white cheek patches, grayish brown back and wings, white rump, black tail feathers, legs, and feet of the species. It is distinguished by a conspicuous white neck ring at the base of the neck that, in adult plumage, is usually greater than 10 mm wide and is subtended by a ring of darker feathers. The cheek patches are usually separated by a black line under the throat and the breast is a pale grayish-brown color, although a small number of lighter and darker breasted birds occur.