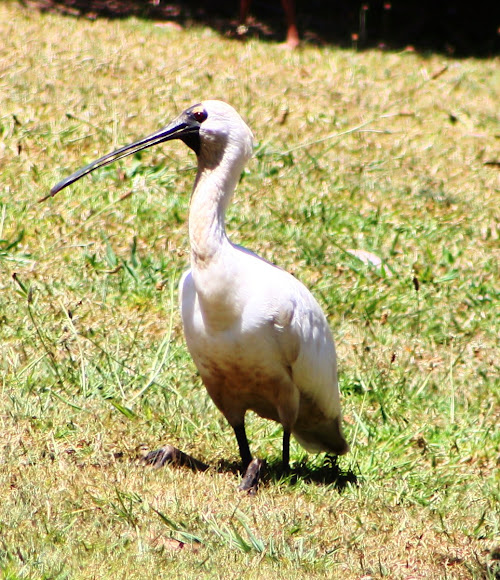 The Royal Spoonbill is a large white waterbird with black, spatulate (spoon-shaped) bill, facial skin, legs and feet. During the breeding season, it has a distinctive nuchal (back of head or nape of neck) crest, which can be up to 20 cm long in male birds (usually shorter in females). The crest can be erected during mating displays to reveal bright pink skin underneath. Breeding adults also have a creamy-yellow wash across the lower neck and upper breast and a strip of bright pink skin along the edge of the underwings which is obvious when the bird opens its wings. The facial skin is black with a yellow patch above the eye and a red patch in the middle of the forehead, in front of the crest feathers. Females are slightly smaller with shorter legs and bill. Out of breeding season, the nuchal crests are reduced, the underwing is not bright pink and the plumage is less brilliant, often appearing 'dirty'. Young birds are similar to non-breeding adults without a crest or coloured face patches, and are slightly smaler with a shorter, smoother bill. The Royal Spoonbill is most often seen wading in shallow waters, sweeping its submerged bill back and forth in a wide arc to find food.

The Royal Spoonbill is found in shallow freshwater and saltwater wetlands, intertidal mud flats and wet grasslands. Both permanent and temporary inland waters are used when available in the arid zone. Will also use artificial wetlands such as sewage lagoons, saltfields, dams and reservoirs.

Spotted sitting beside a dam, near a white faced heron.