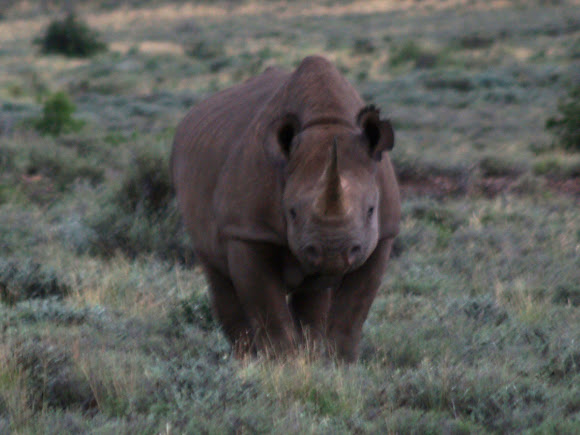 *** 9,000 ***
The first two pictures were taken as we were driving round a loop road. It was walking straight towards us. When I took the first picture it stopped and turned sideways and I took a second. It then charged in that direction, only for a short distance, but we decided to drive off anyway, no-one else was around. About 15 minutes later we came to a wash-out in the track where a river had broken through and as we did not have 4wd we turned around. When we got back to where we had seen the Rhino, a busload of tourists had stopped and gotten out of the bus to photograph it! This is contrary to the park regulations! Anyway, I took a couple more photographs and then we left. It was only a few days ago when looking through the pictures to load here that I realised it was a Black Rhino and not the much more common White Rhino, which we had already seen in Kruger. We had been told that there were no Black Rhinos in South Africa outside Kruger but a check yesterday revealed that there were 5 Black Rhinos in Karoo NP from 2007 when 3 were received from Namibia to supplement the 2 they already had. They do not list any White Rhinos there.

I had already joined but forgot to add this one to it! Well, it took 6 years to post it so a few more days... it's done now.

Well done Malcolm! Please join the Rhinos of the World mission, I would be honoured to have this Black Rhino as part of the collection: http://www.projectnoah.org/missions/1284...

Thank you all. @Ashley, in 2007 it was reported that Black Rhinos had gone from almost everywhere in South Africa except Kruger. In the same year Namibia donated 12 to Karoo, Addo and one other park as part of a program to move some animals from areas with good populations to areas where they were diminishing.

9,000!!!! What an achievement! Congrats Malcolm, it is a pleasure to see your spottings!

Malcolm,great choise to your 9000th one,very nice and rare animal,congrats on the amazing achivement and thanks for sharing

Congrats on your 9000th. Beautiful series.

Several of the parks in South Africa have black rhinos, I saw one at a park in the eastern part of the country. Awesome you got to see one, definitely something that was very special to me. Congrats on 9,000!

9,000th spotting !
Malcolm, you are still going strong.
That is a super achievement !