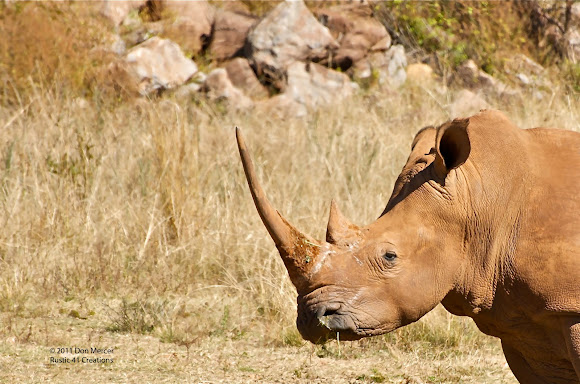 The southern white rhino, along with its "cousin," the northern white rhinoceros, have a square lip. In comparison, the black rhino has a pointed or hooked lip. With some irony, one theory has early settlers deriving "white" from the Afrikaans word, "wyd," for "wide," when referring to the animal's lip.

Approximately 93% of surviving white rhinos live in South Africa. Other populations have been introduced, or reintroduced, to African nations including Namibia, Botswana, Zimbabwe, and Swaziland.

This animal was seen with several others when visiting Rhino & Lion Park outside Johannesburg.

Thank you for joining the mission Rustic 41!

Great spot Rustic 41. Please consider adding this series to our Rhinos of the World mission and help us raise awareness of their plight: http://www.projectnoah.org/missions/1284...