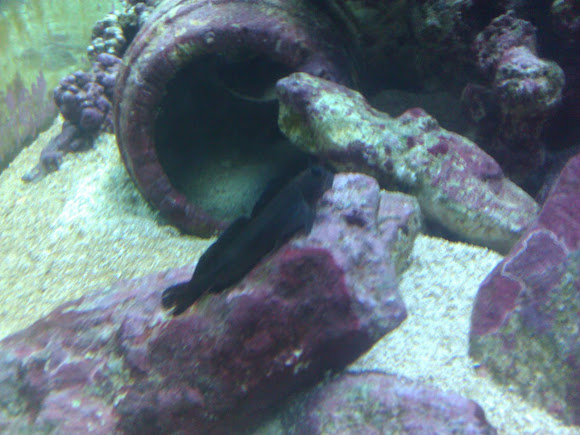 The Hawaiian Zebra Blenny is a benny species endemic to Hawaii. It changes at will from entirely black to a banded pattern. Can reach up to 7.5 inches. There is a raised flap of skin, or nuchal crest, is located on the head behind the eyes. Its diet mainly consists of algea, but in captivity it is known to become a scavenger. When feeding your other fish, it may eat the food your feeding the other fish. It is a small, agile fish whose Hawaiian and English common names refer to their ability to jump from one tidepool to another. If startled, they can leap from pool to pool at low tide without touching the dry rocks in between. The timing and accuracy of their leaps suggests a familiarity with their surroundings.

When feeding my fish in the same tank, the blennies that I have love to snack on whatever food is being fed to the others. Try not to mix these fish when they're small with predatorial fish and territorial fish that are bigger than the blenny because they might just have a little snack before dinner. Also, you can expect some fighting with blennies when you have them in the space. Careful about your cover, because these fish were made to hop in and out of other tidepools. If you don't have a good cover or you leave your tank as it is, don't be surprised to find some beef jerky fish on the ground haha! =)

Wait who is this again?