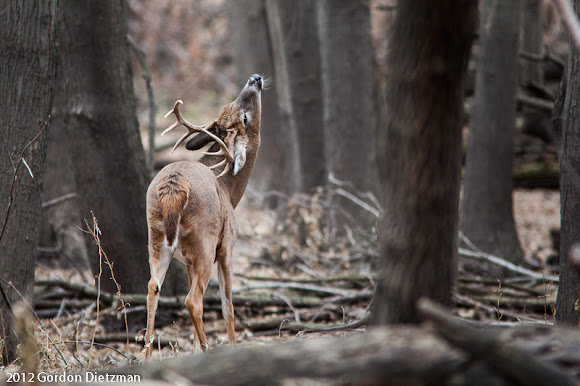 White-tailed deer have a wide range across much of the US and Canada, in a number of different habitats. They tend to avoid large open areas and are most often found in brushy forests and along tree-lined rivers in grasslands. Increasing numbers are found in suburban parks and mature wooded yards.

This is the season of the rut for whitetails in our area. In the second photo two bucks approach each other warily. They will fight, but these two animals, due to their living on a small island, almost certainly know each other and knows who would win a battle so they avoid direct confrontation. A few bluffs and snorts and the confrontation is settled.

Thanks all for your comments and kind words....

The second photo is great!

Thanks everyone for all the kind words. I'm glad you enjoyed the photo and story!

A wonderful SOTD! I suppose it's handy having antlers when you have an itch on your back and don't have hands!

Great Spotting and Photos and Congratulations for SOTD!

This is one of those just perfect photos, Gordon. Congratulations.

Lovely series of photos! Congratulations on your Spotting of the Day!

Congratulations Gordon on this SOTD!

and 65 other people favorited this spotting