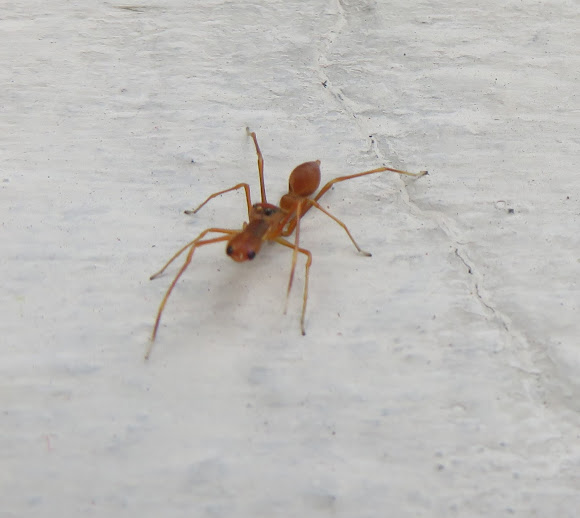 The extreme elongated ends with black dot is not the eye! The eyes are set lower down the body on either sides of the squarish structure.I initially thought it was a weaver ant carrying another ant...this is EXACTLY what it mimics because Wikipedia says " the males resemble a larger ant carrying a smaller one."

The home where author Sarat Chandra Chatterjee spent some time and wrote many novels is now a heritage museum. There is a river near by and the flood plains are used for growing vegetables. I was running to catch up with my group that was going to the river bank and I did not want to be separated. But I thought it was a weaver ant as it had that orangish colour so I took a couple of shots not really being able to focus on that rapidly moving creature...then I realized it had turned around to " confront" me (my camera lens) and I knew I had finally glimpsed ANOTHER animal I had first seen on PN and marvelled. This is not a good shot...it was moving fast on a boundary wall, Raksha had posted one recently I think....and I remember thinking I have to go to Kerala to see one...and I see it soon afterwards in Deulti village..barely a 2 hour drive from my home town. really happy just to have seen it.

If you want to see how it really looks you should see the photo sunnyjosef clicked. https://www.projectnoah.org/spottings/18... Isn't it interesting that although it mimics the weaver ants it stays away from them because they sting!

Thank you, Mark. I was simply fascinated by the duel...the videos were super!

Nice find Sukanya. There's a good video of them on YouTube. Note the focusing mechanism behind the eyes on the first feeding fem. https://www.youtube.com/watch?v=Ef2TpHHL...

Thanks Raksha, yes many animals are found almost everywhere...PN has taught me to observe; to really look and I keep surprising myself with the discoveries.

Raksha a year ago

I am sure they can be found everywhere. It's just we are not looking for them so we are not finding one. Recently i was surprised to find one on my bedroom wall and there was one already documented from the patio. They mimic so well we just think they are ants :)

Thank you Brian and Ashutosh...I was amazed beyond words when I realized what it was. These are not good shots I know, but standing almost on tip toes and trying to stay while the crowds milled around me, hoping not to get separated from my group and then that spider that kept moving...yet. all things considered really happy to have spotted it at all.

The fights between males are also interesting,they open up their chelicerae (fangs) and use them like swords!

I'm glad you found one of these incredible ant mimicking spiders! They are so interesting. I find myself wanting to know more. I would really love to see one catching prey on a video.