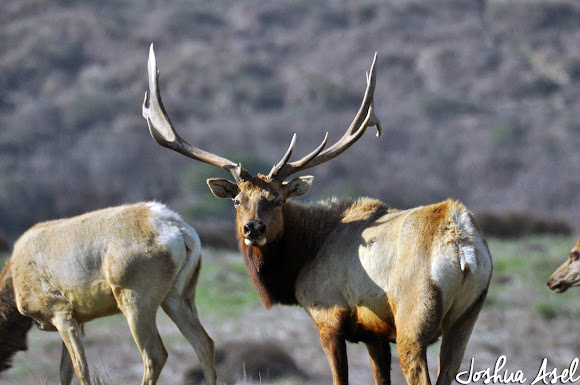 Tule Elk are a subspecies of elk found only in California. After the arrival of Europeans to North America, Tule Elk were thought to be made extinct. In 1874-1875, a single breeding pair was discovered. Over the years they grew and in the 1970's, they were put under California state's protection. Thanks to breeding restoration efforts, there are now more than 4,000. A silver of their estimated population of 500,000 before Europeans arrival. Surprisingly, because their numbers are so low, there has been no official confirmation on their status.

There is also no official site dedicated to their protection. Because they have no official protection status, the are allowed to be legally hunted. And they are also under the poacher's eye.

Yep they are at Point Reyes. In my opinion, it's a shame there's even one location open to hunting! It's outright atrocious considering their extremely low numbers.

There are a few locations where they do allow hunting but by permits.

those are in Point Reyes right? There are only few places you can find them I California and besides Point Reyes most are in the central valley or Monterey CO. and I believe all of them are protected. The ones at San Luis Wildlife Preserve in Merced county are enclosed in 15' high fenced area. Point Reyes they don't worry about them so much escaping or any one coming in to try to poach them since it's in a National Park.

Thanks Emily! You know, the weather in California is really changing. Our winter season is definitely shorter and droughts are longer. Bears are already coming out of hibernation in mid-winter. Flowers are blooming. Raptors strictly from the east coast are appearing at the west coast here in Bodega Bay. And maybe even antlers are falling off later? It's getting fun but crazy.

Great info! Their rack is quite impressive! It's interesting that they still have their rack in January. Most elk and deer in CO loose their antlers in January...but I guess they can still loose them in Feb too!