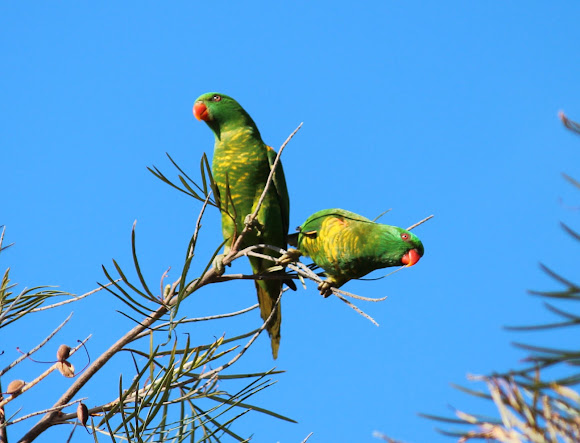 The Scaly-breasted Lorikeet is about 23 cm (9.0 in) long.[3] The crown and sides of head are emerald-green slightly tinged with blue, while the feathers of the back of the neck and throat and breast are yellow, broadly edged with green, giving scaly appearance. The tail is green with the base of the outer tail-feathers marked with orange-red. The lower flanks, thighs and undertail-coverts green are strongly marked with yellow, while the underwing-coverts are orange-red. They have orange-red eyes, and their bills (beaks) are dark coral-red. Their legs are generally grey-brown. Male and female are similar in external appearance. Juveniles appear similar to adults, but their tails are shorter. Eyes are pale brown or black, and bills are brown with some yellow markings or orange with brown markings.

This lorikeet is common in most timbered areas of Eastern Australia from Bamaga, the tip of North Queensland, south to Illawarra district on the New South Wales south coast; also on some offshore islands. They are generally confined to coastal plains and adjacent tablelands; occasionally found along watercourses west of the Great Dividing Range. They are abundant and mostly sedentary in north; less numerous and nomadic in the south. They favour open, lightly timbered areas and melaleuca thickets.

Thank you fede1, MacC & Maria. This was the first time I've seen these lovely birds. They're beautiful :)

Thank you Seema ;) They were just outside my window while I was uploading todays spottings!