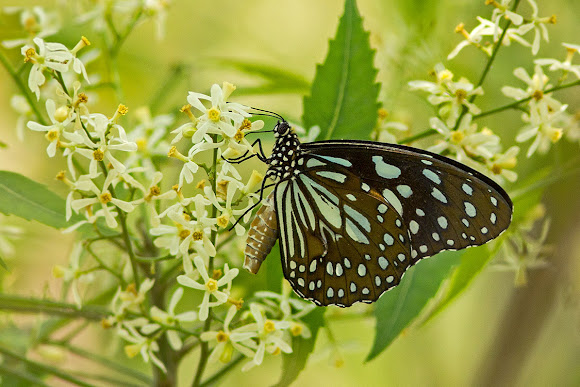 The Blue Tiger (Tirumala limniace) is a butterfly found in India that belongs to the crows and tigers. Upperside black, with bluish-white semihyaline spots and streaks. Fore wing: interspace 1 two streaks, sometimes coalescent, with a spot beyond cell: a streak from base and an outwardly indented spot at its apex; a large oval spot at base of interspace 2, another at base of interspace 3, with a smaller spot beyond it towards termen; five obliquely placed preapical streaks, and somewhat irregular subterminal and terminal series of spots, the latter the smaller. Hind wing: interspaces 1b, 1a, and 1 with streaks from base, double in the latter two, cell with a forked broad streak, the lower branch with a hook, or spur-like slender loop, at base of 4 and 5 a broad elongate streak, and at base of 6 a quadrate spot; beyond these again a number of scattered unequal subterminal and terminal spots. Underside: basal two-thirds of fore wing dusky black, the apex and hind wing olive-brown; the spots and streaks much as on the upperside, Antennae, head and thorax black, the latter two spotted and streaked with, white; abdomen dusky above, ochraceous spotted with white beneath. Male secondary sex-mark in form 1.