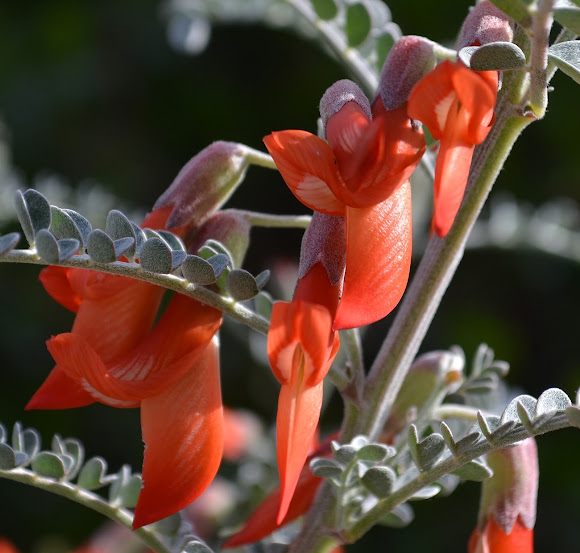 Sutherlandia frutescens (Cancer bush, Balloon pea, Sutherlandia; syn. Colutea frutescens L., Lessertia frutescens (L.) Goldblatt & J.C.Manning) is a southern African legume which has traditionally been used as an indigenous medicine for a variety of ailments. It is a shrub with bitter, aromatic leaves. Red-orange flowers appear in spring to mid-summer. An infusion made from the leaves is a traditional remedy for fever, chicken pox, flu, rheumatism, hemorrhoids, diarrhea, and stomach and liver problems. In modern times, S. frutescens has a reputation as a cure for cancer and for treating the symptoms of HIV/AIDS. However, there is no scientific support for the claims that this plant can cure cancer or AIDS, though some preliminary evidence exists suggesting a potential benefit in aiding immune disorders

Ja, I noticed. Get out there and show is the magic of the Kasteelberg! I love that area!

great! the fruit are usually called Gaansies, if you hold them upside down, they look like a goose....I am itching to get into the bush again...been keeping a low profile!

That is amazing, they have now made their blister bubble fruit, so I will take more pics and add that wonderful side of this unique healthy plant! Thank you Wendy! Every week somethings else is blooming here! Im loving the fynbos!!

Awesome spot! This is truly a miracle plant, part of it's mode of action is that in wasting diseases such as HIV; it stimulates the appetite; thus increasing bodies defense by eating(you get a serious case of the munchies when you work with it:); it is also adaptogenic; so it will be used where it is most needed. Research has also been performed in diabetes and in assisting with depression. sorry...but very passionate about this plant...it is the answer to many 3rd world problems.