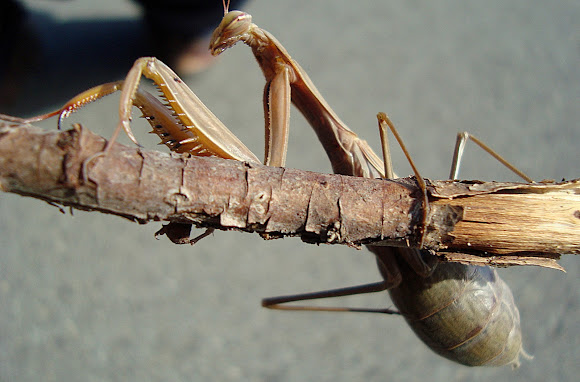 One of the most well-known and widespread species of the order Mantodea.

Originating in southern Europe, the European Mantis was introduced to North America in 1899 on a shipment of nursery plants. Now they are found all over the north-eastern United States and Canada to the Pacific Northwest. The European Mantis is usually 5–7.5 cm (2–3 inches) in length, and has shades of bright green to tan. It can be distinguished easily by a black-ringed spot beneath the fore coxae. It is one of several different insects for which a name used within Europe to refer to only a single insect species (in this case, "praying mantis") has become adopted throughout the globe to refer to the larger group of insects to which that one species belongs (e.g., compare "hornet" to European hornet, or "wasp" to common wasp). Despite being an introduced species, it is the official state insect of Connecticut.

What a very pregnant female mantis