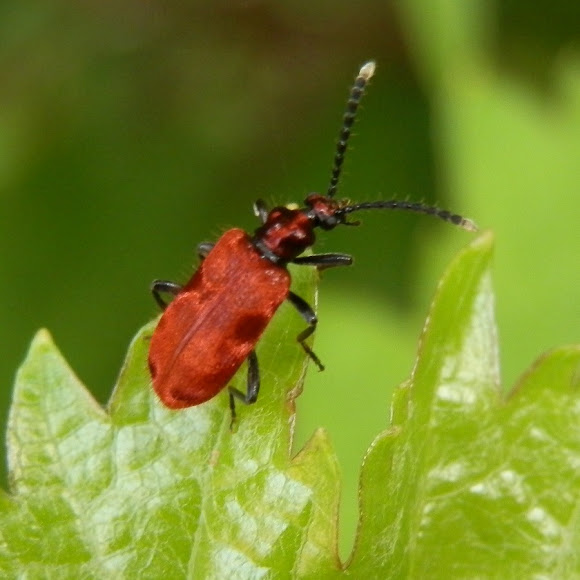 About 6 to 7mm long, this red beetle appeared to have a "silky" elytra with diffuse patterns in red which changed as it moved. Dense bristles seen on elytra ( pic#4). The narrow thorax had black sides. Antennae appeared beaded with a bristly white tips. http://morwellnp.pangaean.net/cgi-bin/sh...

Fast moving beetle belonging to the family Anthicidae; Group: Lemodinae. "The Lemodinae is a relatively small group of Anthicidae distributed in the Australian region (including New Guinea and Solomon Islands), as well as in Chile. The group includes six genera and about 40 recent species; no fossil records are hitherto known for this subfamily. Representatives of the Lemodinae occur in various habitats from rainforests to dry savannahs and mountains. The species of Lemodes Boheman are among the most colourful representatives of the family Anthicidae. Almost nothing is known about biology and ecology of this group" Source: Tree of Life Web Project.

Yes, Keith - I think everyone in Melbourne, Victoria has now got a spotting of the flower beetle !! :) - mine is similar to Rachael's.

Hey Leuba, I saw something similar in my garden today: http://www.projectnoah.org/spottings/159...
I can't ID it, do you think it's a flower beetle?