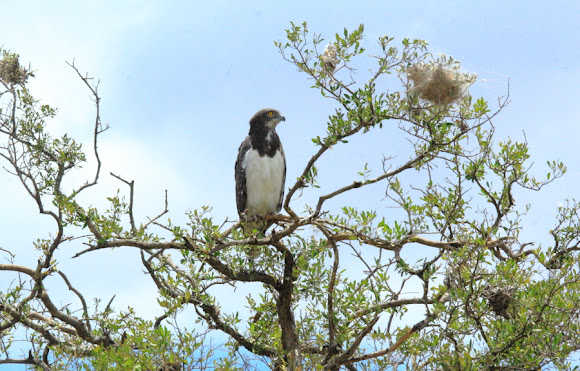 The Black-chested Snake Eagle (Circaetus pectoralis) is a large African bird of prey of the Accipitridae family. It resembles other snake-eagles and was once believed to be con-specific with the Short-toed Snake Eagle and Beaudouin's Snake Eagle. The main identification character of this bird is its dark brown head and chest, to which it owes its name. In flight the dark head contrasts with the underparts and under wings, which are white apart from dark barring on the flight feathers and tail. The upper parts are dark brown, and the eye is yellow.

This species can be found throughout southern Africa from Ethiopia and Sudan in the north to South Africa in the south and Angola in the southwest. It inhabits different habitats, providing it can find open terrain to hunt on, trees to perch and nest in, and sufficient food supply. This includes semi-arid or even desert areas.