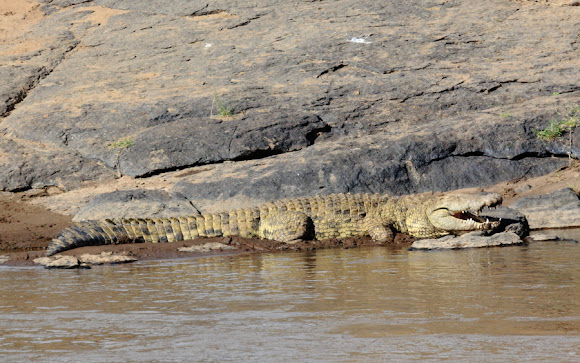 Nile crocodiles have a dark bronze coloration above, with black spots on the back and a dirty purple on the belly. The flanks, which are yellowish-green in color, have dark patches arranged in oblique stripes. There is some variation relative to environment; specimens from swift-flowing waters tend to be lighter in color than those dwelling in lakes or swamps. They have green eyes. Like all crocodiles, the Nile crocodile is a quadruped with four short, splayed legs, a long, powerful tail, a scaly hide with rows of ossified scutes running down its back and tail, and powerful jaws. It has nictitating membranes to protect the eyes and lachrymal glands to cleanse its eyes with tears. The nostrils, eyes, and ears are situated on the top of the head, so the rest of the body can remain concealed underwater. The coloration also helps to camouflage it ; juveniles are grey, multicolored, or brown, with dark cross-bands on the tail and body. As it matures, it becomes darker and the cross-bands fade, especially those on the body. The underbelly is yellowish green, and makes high-quality leather. They normally crawl along on their bellies, but they can also "high walk" with their trunks raised above the ground. Smaller specimens can gallop, and even larger crocodiles are capable of surprising bursts of speeds, briefly reaching up to 12 to 14 km/h (7.5 to 8.7 mph). They can swim much faster by moving their bodies and tails in a sinuous fashion, and they can sustain this form of movement much longer at about 30 to 35 km/h (19 to 22 mph). They have a four-chambered heart, although modified for their exothermic nature due to an elongated cardiac septum, physiologically similar to the heart of a bird, which is especially efficient at oxygenating their blood. They normally dive for only a few minutes, but will stay underwater for up to 30 minutes if threatened, and if they remain inactive they can hold their breath for up to two hours. They have an exothermic metabolism, so can survive for long periods between meals — though when they do eat, they can eat up to half their body weight at a time. They have a rich vocal range, and good hearing. Their skin has a number of poorly understood integumentary sense organs (ISOs) that may react to changes in water pressure.

Yes Smith'sZoo , the Nile Crocodile is an amazing creature