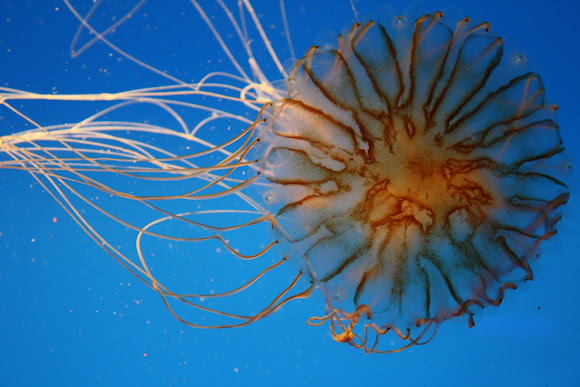 Jellyfish are the major non-polyp form of individuals of the phylum Cnidaria. They are typified as free-swimming marine animals consisting of a gelatinous umbrella-shaped bell and trailing tentacles. The bell can pulsate for locomotion, while stinging tentacles can be used to capture prey.

Jellyfish are found in every ocean, from the surface to the deep sea. A few jellyfish inhabit freshwater. Large, often colorful, jellyfish are common in coastal zones worldwide. Jellyfish have roamed the seas for at least 500 million years, and possibly 700 million years or more, making them the oldest multi-organ animal.

This picture was taken at the National Zoo, in Washington DC.

Thanks for the hints ;-)

Lovely photo! Please can you add when you saw this in the notes so that it is clear this was spotted in an aquarium & not in the wild. We ask that you do this for all captive species.
Welcome to Project Noah DBO!

I don't believe jelly fish fall into the fish catagory. You may want to leave it in the Other catagory