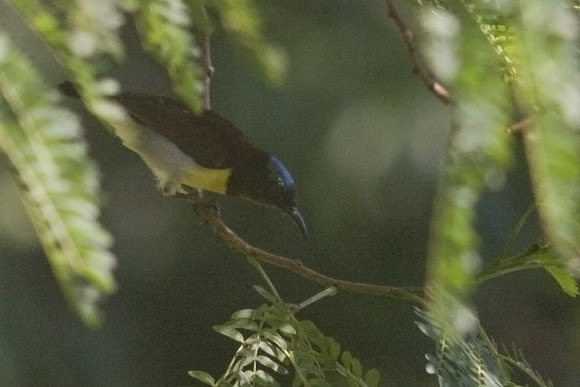 Photograph was taken at the backyard. The Purple-rumped Sunbird (Leptocoma zeylonica) is a sunbird endemic to the Indian Subcontinent. Like other sunbirds, they are small in size, feeding mainly on nectar but sometimes take insects, particularly when feeding young. They can hover for short durations but usually perch to feed. They build a hanging pouch nest made up of cobwebs, lichens and plant material. Males are brightly coloured but females are olive above and yellow to buff below. Purple-rumped Sunbirds are tiny at less than 10 cm long. They have medium-length thin down-curved bills and brush-tipped tubular tongues, both adaptations to their nectar feeding. Purple-rumped Sunbirds are sexually dimorphic. The males have a dark maroon upperside with a blue-green crown that is visible in some angles. There are violet patches on the throat and rump which are visible only in good lighting. There is also a maroon breast band. In the Western Ghats, it can overlap in some areas with the Crimson-backed Sunbird but that species has reddish upperparts. The female has a white throat followed by yellowish breast. There is a bright green shoulder patch. The upperside is olive or brownish. The uppertail coverts are black and a weak supercilium is visible. The nominate form is found in Sri Lanka and has a more bluish violet throat whereas the Indian form flaviventris (two other proposed populations whistleri from Maddur in Karnataka and sola from Pondicherry are subsumed) has a more pinkish tinge.