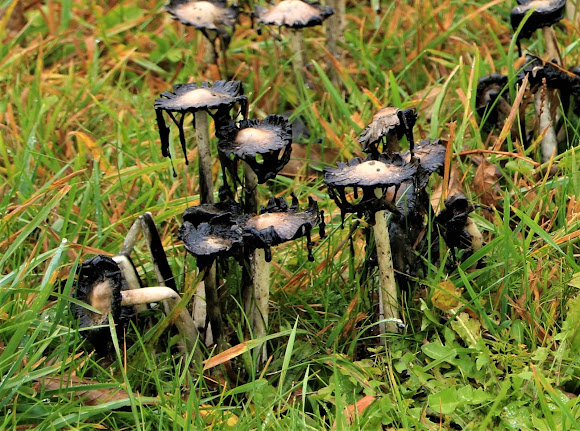 Large colony of these, easily recognized fungus, known as Shaggy ink cap, Lawyer's wig or shaggy mane. The colony was spreading on over 100 square meters, and all stages of development of fruit bodies were present - the most spectacular ones were the old specimens (pics N° 1, 2 and 3), in full blast of deliquescence, becoming liquid while releasing spores.

Found on shores of a small lake in Jura range, totally surrounded by mixed, but mainly coniferous forest.

Younger specimens (pic N°4), while white and before gills turn black, are appreciated edible mushrooms, of a delicate flavour. But as an old mushroom gatherer explained once, as soon as spores start to form, edges of the cap start turning black, it's not worth collecting... Moreover, once collected, they need to be prepared almost immediately.