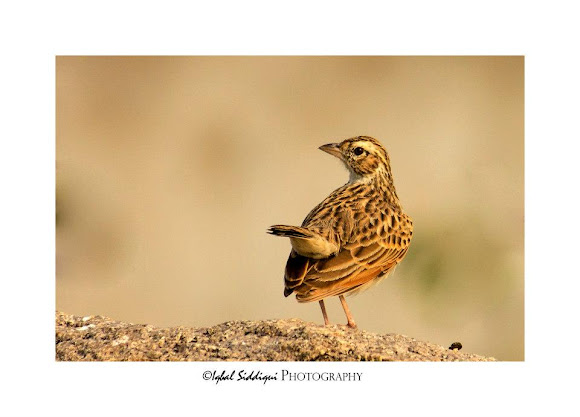 Pale and found mostly in arid areas. Has cheek patch completely bounded by white supercilium and post-auricular border. Crown and upperparts heavily streaked. Pale underparts have large spots on the breast. Differentiable from Jerdon's Bush Lark by longer tail, shorter bill and legs. Most wing coverts, tertials and central tail feathers have pale centres. Primary coverts look all brown. Sings from bush tops but does not usually perch on trees or wires. Calls similar to that of Jerdon's but is lower and has longer rattling tremolos. Often falling in pitch.[2] The song-flight during the mating season is an amazing spectacle. The bird flutters high over the ground, then holds its wings in an open V and "parachutes" down to its perch uttering its song consisting of short tweets and cheeps in three syllables followed by a longer fourth syllable. This combination is oft repeated till the bird perches again.