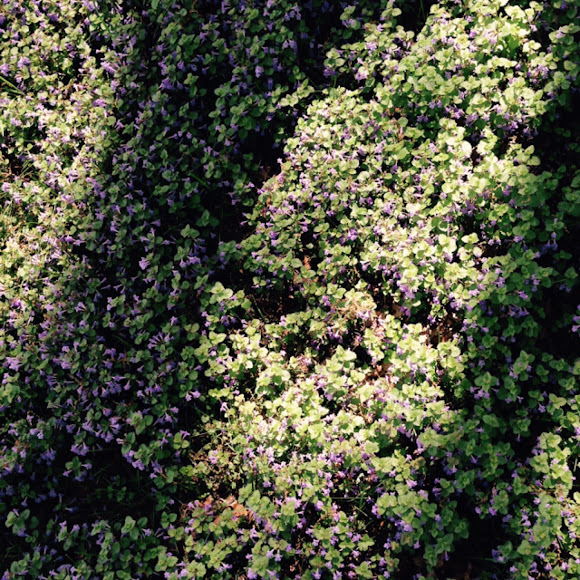 It can be identified by its round to reniform (kidney or fan shaped), crenate (with round toothed edges) opposed leaves2–3 cm diameter, on 3–6 cm long petioles attached to square stems which root at the nodes. It is a variable species, its size being influenced by environmental conditions, from 5 cm up to 50 cm tall.[2]

Glechoma thrives in moist shaded areas, but also tolerates sun very well. It is a common plant in grasslands and wooded areas or wasteland. It also thrives in lawns and around buildings since it survives mowing. It spreads by stolons or by seed. Part of the reason for its wide spread is this rhizomatousmethod of reproduction. It will form dense mats which can take over areas of lawn, and thus can be considered potentially invasive or aggressive weed.[1]

Glechoma has culinary and medicinal uses which were the cause of its being imported to America by early European settlers. The fresh herb can be rinsed and steeped in hot water to create an herbal tea which is rich in vitamin C. It has a distinctive, mildly peppery flavor; it can be cooked as a pot herb, although it is most commonly eaten as a fresh salad green.[8] Glechoma was also widely used by the Saxons in brewing beer as flavoring, clarification, and preservative, before the introduction of hops for these purposes; thus the brewing-related names, alehoof, tunhoof, and gill-over-the-ground. Glechoma has been used in the cheese-making process as a substitute for animal rennet.[9]