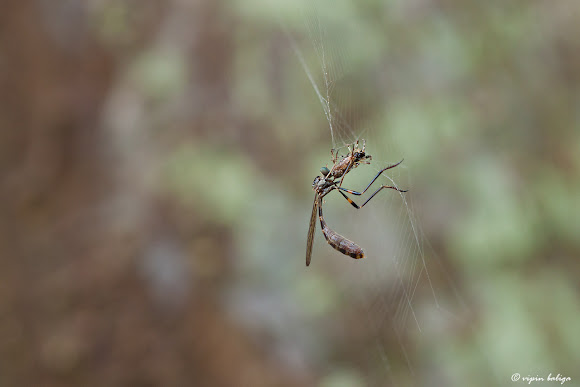 Wasp Mimic Robber fly feeding off a Spider Initially I thought it was the spider (Cyclosa ssp?) which had the Robber fly in its grasp. But I was really surprised when I zoomed in on the photograph in my camera. In the next few seconds the Robber fly took off and the dead spider just dropped to the ground.

Thanks a lot Gordon... :-)
I was surprised and fascinated on seeing this behavior... :-)

A very interesting story! I never knew that robber flies would go after spiders. I wonder if this behavior is repeated in other places and species and I wonder what physical/behavioral adaptations a robber fly possesses that prevents it from becoming entangled in the spider's web? Thanks for posting your spotting. Fascinating....