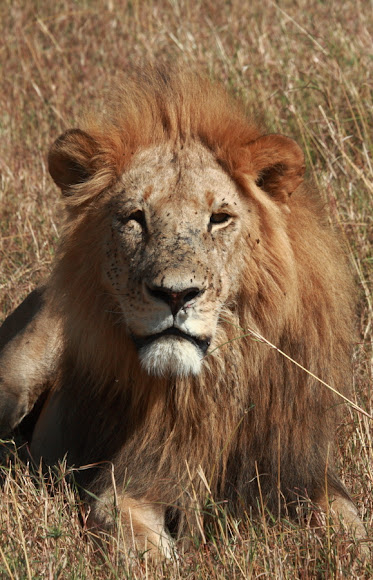 Lions live for 10–14 years in the wild, while in captivity they can live longer than 20 years. In the wild, males seldom live longer than 10 years, as injuries sustained from continual fighting with rival males greatly reduce their longevity.They typically inhabit savanna and grassland, although they may take to bush and forest. Lions are unusually social compared to other cats. A pride of lions consists of related females and offspring and a small number of adult males. Groups of female lions typically hunt together, preying mostly on large ungulates. Lions are apex and keystone predators, although they scavenge as opportunity allows. While lions do not typically hunt humans, some have been known to do so. Sleeping mainly during the day, lions are primarily nocturnal, although bordering on crepuscular in nature

HAHAHA...my necklace was made by some Maasai women that were selling them near a camp I stayed at in the Maasai Mara on the escarpment.

Also, Carol, this big guy was only about 10-12 feet from our Land Rover, so no need for a super zoom on him. He was up close and personal...

HA! Thanks for the camera information, but I was really asking about your outfit (necklace). That is funny! Photo information is "Greek" to me. But thanks!

And Cindy, tell me the history of your profile photo accessories. Thanks for sharing photos that are so stunning to me.