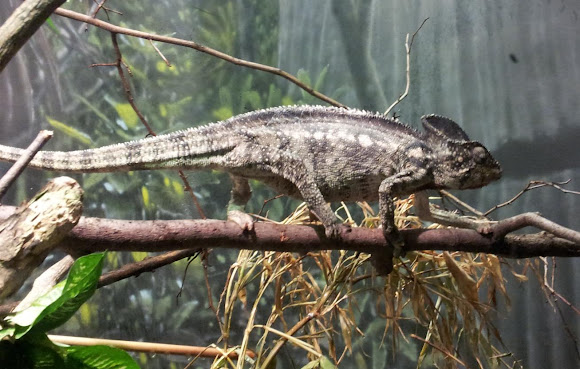 The Oustalet's or Malagasy Giant Chameleon is a very large species of chameleon that is endemic to Madagascar, but also has been introduced near Nairobi in Kenya (though its current status there is unclear). It occurs in a wide range of habitats, even among degraded vegetation within villages, but is relatively rare in primary forest. With a maximum length of 68.5 cm (27 in), it is often considered the largest species of chameleon, though some suggest that prize goes to Calumma parsonii. The diet of this chameleon includes, but is not limited to, invertebrates such as large insects. Prey is acquired with a long, muscular tongue. (information from Wikipedia)