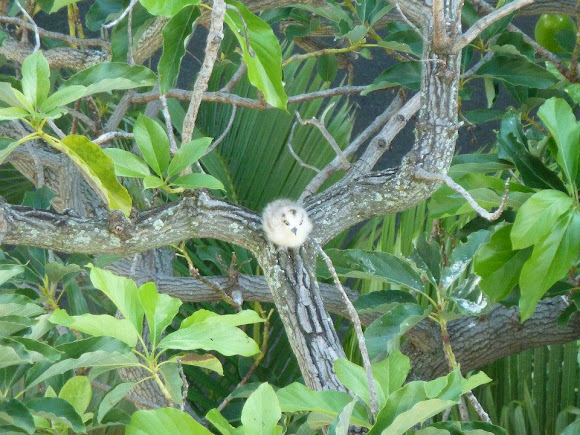 The White Tern, sometimes referred to as the Fairy Tern or Angel Tern, is a small, all white bird with a long, black beak. They have black rings around their eyes, giving them the appearance of large and ever-watchful eyes. The chicks have brown spotting that fades away with time. Fledging occurs 48 days after hatching. The tern's primary diet is small fish, and the chicks are fed whole fish, not regurgitated food.

The terns are commonly found nesting on subtropical islands in the Pacific and Indian oceans, and are often seen on O'ahu, Hawaii (that's where I found this little guy). When nesting, the white tern builds no actual structure, but instead lays its egg on the branch of tree in a solid spot, like a fork between two branches. Both mother and father take turns incubating the single egg that is laid. The chicks have tiny claws on their webbed feet, used for gripping the tree when harsh winds disrupt the branches.

During my vacation on O'ahu, I stayed with my grandfather in his apartment building. While there, I discovered a white tern nest on an avocado tree just outside the building. From my grandfather's apartment, I could see above the nest, and from the apartment where I was staying, I could see directly into it. I watched the baby tern (whom I named Twiggy) grow from helpless chick to self-sufficient bird as he practiced flying and was faithfully fed by his parents every day. It was so amazing to watch how dutifully his mother came back to clean and watch over her chick, and to keep him safe from other terns who were trying to nest in the same area. What a truly great experience I had on my vacation!