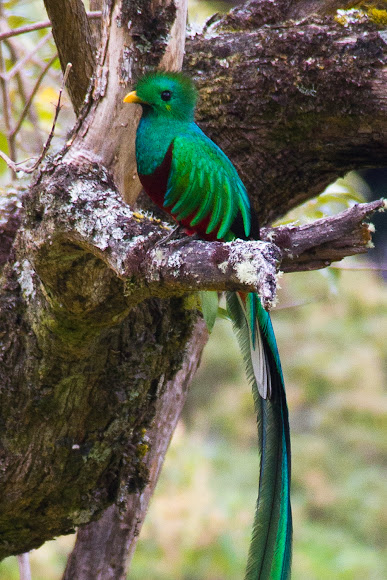 This remarkable and resplendent quetzal was spotted on a branch of a tree by the side of the road. This male quetzal was about 40cm long, decorated with a 50cm long bright green tail streamer. The tail, combined with its ruby red chest, make this bird one of the most beautiful birds on earth. It was spotted close to a female quetzal (which wasn't photographed). The female does not have a tail streamer like the male.

Their habitat is montane cloud forest from southern Mexico to western Panama. This one was spotted in the cloud forest of San Gerardo de Dota, Costa Rica, an area famous for quetzal spottings.

How lucky to get one beside the road and staying there.